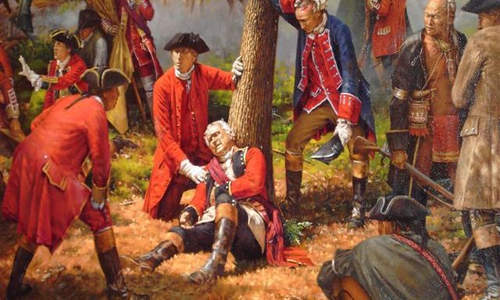 In November 1753, 21-year-old George Washington first traveled an old Native American path over the rugged Appalachian Mountains. It was called “Nemacolin’s Path,” and began at the junction of Wills Creek and the Potomac River, at the site of present-day Cumberland, Maryland. The path then traversed a series of mountain peaks through endless forest to the Forks of the Ohio, the meeting place of the Allegheny, Monongahela, and Ohio Rivers (now Pittsburgh, Pennsylvania). Washington traveled as an emissary on behalf of Virginia. He carried an order for the French military to withdraw from the fertile Ohio Country, which had been claimed by both the British and French crowns. Many tribes of Native Americans, primarily the Six Nations of the Iroquois and the Delawares, also claimed these lands. All sides were willing to shed blood to secure their rights.

When negotiations between Washington and his French counterparts failed, the three empires prepared for war. Washington traveled Nemacolin’s Path a second time in the spring of 1754, leading a band of Virginia militia in an effort to forcefully expel the French military, which had seized the Forks of the Ohio.Washington fought the French twice in 1754, at the Jumonville Glen, and at the battle of Great Meadows or Fort Necessity. In the latter engagement, Washington surrendered to the French after taking heavy casualties.

In 1755 the Nemacolin Path became “Braddock’s Road” in honor of British Gen. Edward Braddock, who led a costly expedition against the French Fort Duquesne at the Forks of the Ohio. Gen. Braddock widened the path into a 110-mile road for his army of siege guns, field pieces, 200 wagons, and 2,200 troops. It was an epic maneuver in a summer plagued by heat and drought.

Participants in the campaign included:

Seven miles short of Fort Duquesne, Braddock’s force was surprised and routed by an allied force of French and Native Americans at the Battle of the Monongahela. Braddock received a mortal wound in battle, and George Washington led the retreat back to the mountaintop camp of the British supply train. Here, at Dunbar’s Camp, the army destroyed supplies too heavy to carry back to Fort Cumberland, and fleeing eastward, chose the roadbed for Braddock’s grave to prevent the general’s body from being defiled by the enemy. The shattered army soon went into winter quarters in Philadelphia–in July.

Other Historial Significance of Braddock Road

The French & Indian War ended in this region in 1758 when Gen. John Forbes marched an army westward across Pennsylvania and captured Fort Duquesne. Forbes purposefully avoided Braddock’s Road, which was longer and had fallen to disrepair. But Braddock’s Road was not to be forgotten. It would soon become a major route for settlers heading west to the new town of Pittsburgh and on into the Ohio Country. It would form the basis for the first National Pike, which went on to become U.S. Route 40, and then U.S. 68. The name of Braddock has been remembered with streets, towns, and waterways, and his mastery of the terrain has formed the basis for interstate transportation as we now know it in the mid-Atlantic corridor.